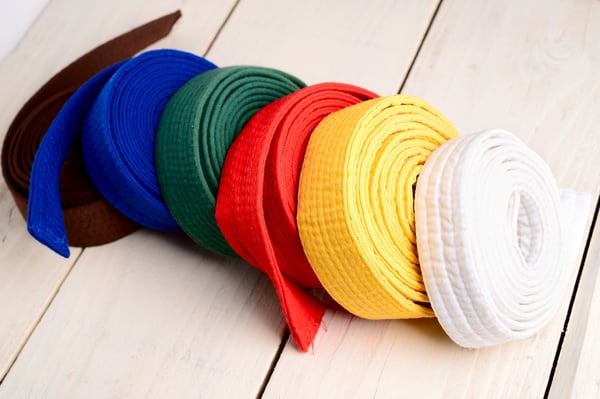 Gaining a new belt is a major accomplishment for martial artists of all ages and disciplines. Many times, schools/dojos hold a special ceremony where advancing students are presented with their new belt.
First off, can we all take a moment to acknowledge that this is really gross? In reality, the initial purpose of martial arts belts was simply to hold up students’ pants! Using belts as part of the ranking system didn’t evolve until the late 1880s, when the founder of judo, Jigoro Kano, introduced the concept in Japan. By the early 1900s, the idea had spread throughout many styles and schools around the world. Today, most forms of martial arts practice incorporate some form of colored belt ranking system to track students’ progress.

In some schools, your belt rank determines which types of training you are eligible for. For example, some schools may not let students spar until they have reached a certain rank. Here, an orange-belt child spars with a purple belt.

Earning rank advancements means that you have demonstrated competence at increasingly more difficult levels of skill. It also means that you are setting an example of leadership for students who have not yet reached your level of accomplishment. If you are working toward a black belt, you can track how far away you are from this goal with the color of your belt, and you can look for guidance from fellow students who are further down the path. As you get closer to reaching your first Dan, the martial arts belt colors you see in your school can be a source of motivation and inspiration, pushing you ahead toward mastery.